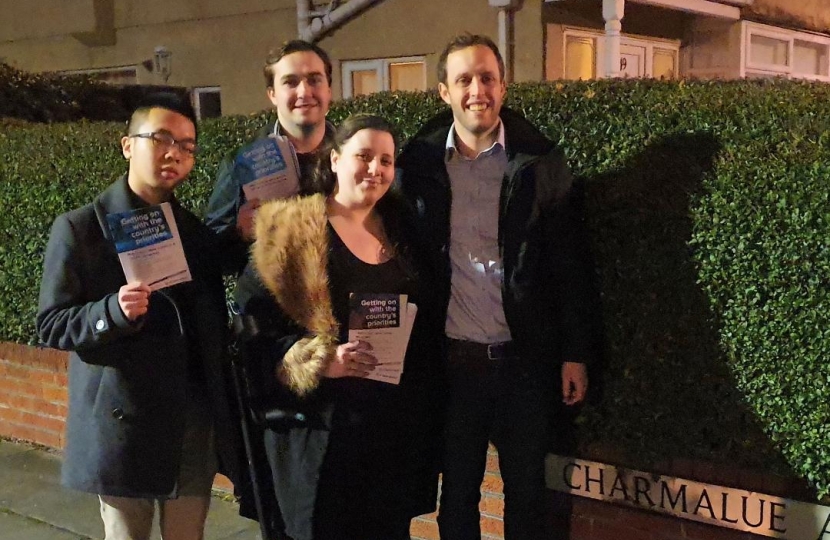 The Birth of Bootle

What a difference a year makes! It is almost 12 months since parliament (finally) voted for an early general election, the third in less than 5 years, the ninth in my lifetime and the fifth in which I would have a vote. I recall the night and indeed the moment the election passed in parliament very well. I was on a very rare evening out in a local hotel bar with a Labour-voting friend, she filled with joy at the prospect, convinced that Jeremy Corbyn would be building on the huge vote swing he gained in the 2017 snap election. I meanwhile was less sure about everything. An election was the only option of course but the Great British public had already been given the chance to break the deadlock in 2017 and that had only at best made little difference and by that point, had now made matters worse. I honestly didn't feel that Corbyn could ever be PM but I couldn't shake the fear at the prospect either. I also did some quick mathematics in my head and worked out that we were looking at an election just days before Christmas. One could only hope that the electorate was to deliver an early gift and not the prophetic nightmare before Christmas!

One thing I could feel fairly sure of, even before the campaigning had begun or the polls had opened was the result in my own constituency of Bootle. Previously part of the now abolished Crosby seat, my ward has been part of Bootle since 2010. Until 1997, Crosby was a safe Conservative seat and I recall vividly and painfully, the night it was lost to Labour. Practically overnight, my own hardworking family household became 17% worse off (something that I worked out many years later during an argument with a raving Socialist acquaintance). We now had a Labour MP who disappeared on maternity leave for six months, soon after the election and who proceeded to have the highest expenses claims of any MP in the country, as exposed in 2004. Even The Guardian was critical. Who said things could only get better? Adding my ward and it's neighbouring one to the Bootle seat, following the abolition of Crosby, has only served to increase the hold Labour has on the area. This breaks my heart for several reasons. My parents were born and bred in the district of Bootle, as were all four of my grandparents. All Labour voters by tradition, though not by conviction and living Conservative lives (note the big C) and whom had seen their families survive under Labour governments but thrive under the Tories, whether they'd ever realised it or not. Meanwhile, Labour MP's and councillors play the political blame game while achieving nothing for the area, knowing that they are safe in their seats and practically guaranteed the votes regardless of leadership, policy or performance. All this in a seat that was once held by Andrew Bonar Law. My Grandparents memory, legacy and the home town they loved deserves more. A lot more.

So, November dawned and the Bootle constituency was gifted her candidate, Tarsilo Onuluk. They say strangers are just friends that we haven't met yet and in this case, at least, that was certainly true. The first contact he and I had was via text message. His energy and enthusiasm glowed from the phone screen and as I read his words and I wondered if this poor individual had any idea of the political jungle he was being thrown into. He had arrived to hit the ground running and the first task was to collect his 10 signatures so he could officially become our candidate. Having landed in the heart of the constituency, in Bootle itself, on a cold and rainy night, I arranged to meet him and was provided with the details of his location, a public house on Stanley Road. Certainly not my milieu and not really that of the average Tory candidate either. I led him to the more Tory-esque parts of the constituency to complete the first tasks and tour the area he was fighting for. A baptism of fire if ever there was one . . . . . . .

So CCHQ had sent me a new best friend as well as a fantastic candidate. What followed for he and our activists was 5 weeks of constant campaigning, community events, meeting the people, seeing the places, joy and sadness, energy and exhaustion, warm welcomes and the odd “un” welcome, sublime and ridiculous, and laughter but never quite tears. Biblical weather was a daily challenge, telephone canvassing replaced door knocking when rain stopped play, we campaigned across Bootle, Sefton, Liverpool and even had a near-death experience in an Uber in the Queensway Tunnel. For the first time in my adult life, the 5th of December dawned and I didn't have a Christmas tree up in my house. Hideous. The six weeks previous now seemed like another world completely.

Then, the voters went to the polls. We could do no more, the ballots were all in their respective boxes, and the elation started with the exit poll. As we waited to head off to our respective counts, we watched the result come in with a number of other candidates and activists from across the city, all with the same situations. A seat that was almost certainly to remain red. The exit poll predicted tens of those would be turning blue but none of them were in the “L” post code. So we’d given it our all, forged new friendships, discussed everything from the possible to the impossible but this seemed like a dream. Could we dare hope it be accurate? Had the so-called Red Wall really crumbed? Had prayers been answered and this was the end of Corbyn? It was, it had and yes, it actually was. Christmas had come early - thank God I'd actually got that tree up in time!

The result in Bootle (like across most of the Merseyside seats) was no surprise. 4,510 votes and a 9.2% Conservative share. A small loss in percentage from the 2017 election, which appeared to go to the newly formed Brexit Party. A sign of the times perhaps, this was after all the Brexit election and we had won it across the country with the simple slogan “Get Brexit Done”. There was an even bigger loss for Labour of 4.6% and once again The Lib Dems lost their deposit in Bootle as well as, nationally, their leader, despite her determination that she could become PM with their “cancel Brexit” stance. I voted Remain in the 2016 referendum but the result said “Leave” and so that was what must happen. It was nice to see that Bootle voters at least had a respect for democracy! Any disappointment at our local expected results being just that was quickly offset by the thrill of seeing other results be declared and the predicted Red seats turning Blue one by one. Blyth Valley was the first to turn and when I heard that, I started to believe the exit poll may just hold some weight. Corbyn’s grip on the north was collapsing like a line of dominoes.

The question then was “so where from here?” An 80 seat majority in Westminster but no more seats locally and all to fight for. Bootle was now the only constituency on Merseyside not to have a Conservative Association. It did however have several members and nearly 10% of the voters support. Mid-campaign we discussed the possibility of reviving the Association and now seemed the ideal opportunity to do so. Working with our fellow local Associations, discussing the whys and wherefores, we decided the best time to launch would be in April. We would “Get Brexit Done” in January, use February and March to take care of all the formalities, contact our members and arrange the meeting to make it all official, just in time for the May 2020 local elections. What could possibly go wrong?

So the new year dawned, 2020, promising hope and political progress. Brexit was done or at least started on 31st January, parliament was moving again, we had a manifesto to implement and the electorate had given Boris a mandate to do it. Even the most optimistic amongst us could not fail to have feared for the effect of a certain virus, growing at speed across the world. We’d heard similar before of course, SARS and MERS, Bird-flu, Swine-flu but this seemed like something different. Soon our plans were being hampered by lockdowns and restrictions. Plans for door knocking quickly became plans for Connect Calling. Direct mail and leaflet dropping became E-mail and our meeting plan became delayed and delayed and delayed again. Deterred but determined, it was our dear Sovereign herself who said it as she addressed the nation; “We’ll meet again”.

And so we did; not as planned, not as hoped and certainly not, as I at least, ever imagined, we held our inaugural meeting on Zoom with the four Conservative members of my household in the room and the rest of our members and supporters joining us virtually. Coincidentally, it fell on the 80th anniversary of Winston Churchill becoming leader and PM. Sometimes fate just has it sorted. And so it was that the on a windy, rainy night in a living room in Waterloo, the new Bootle Association was born. I’ve already had the blue plaque forged . . . . . . . .

We move forward now in perhaps the most challenging of times for the majority in living memory. Restricted we may be but this is not the time to falter, locally or nationally. History continues to teach us that fortune favours the brave. When I consider the biggest challenges that this country has faced in the last 100 years; world wars, the Falklands, Brexit and now Covid-19, I think how blessed we are to have and to have had Conservative governments in power at these times of crisis, to fight back and win through. It always takes time, it takes patience and it takes courage. Good things come to those who wait.

Only recently, I researched the history of that same public house in which I met Tarsilo Onuluk that evening. It's named The Wild Rose, a quaint, almost romantic name, perhaps more befitting to a small country inn than to a chain pub in L20. To my delighted surprise, I discovered that it was so named in honour of the former Conservative Prime Minister and fellow Liverpolitan, William Gladstone. Recalling his birthplace, in later life he wrote: “I have seen wild roses growing on the very ground which is now the centre of Bootle.” Proof positive that big changes in Bootle can be achieved. It feels most inspirational that it was here, in the shadow of Gladstone's honour that the seeds of the new Bootle Conservative Association were sown.