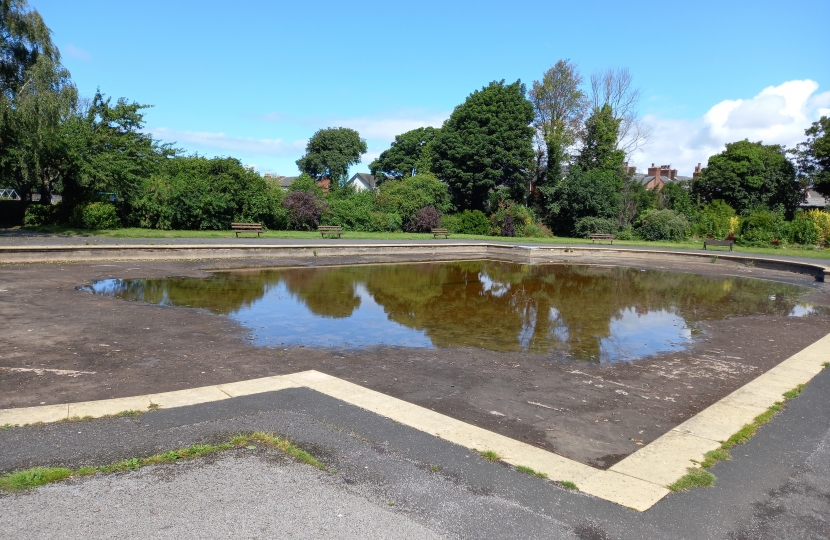 With our harried and nonstop family lifestyles, many temptations can lure your children away from play. Television, computer games and smartphones all aim to capture a significant portion of children’s attention. Advertisers and retailers are increasingly reaching out to younger and younger children in an effort to convince them or their parents to buy new electronic products. In this push for children to have more and more screen time, it is important that children are encouraged to play outside in a safe and stimulating environment.

Where do many families go? The local park of course. But a trip to the popular and much used Coronation Park in Crosby will be a miserable experience. Vital play equipment for our young children has been removed and no indication of when or if it is to be reinstated. Summer is here, the children want to play but Sefton remove the play equipment from under their noses. The boating lake lies empty. No chance to sail your model boat here.

The same old story will trip from the lips of our councillors, “There is no money”. Rubbish. Those of us who read the minutes of council meetings, boring as they are, tell another story.

Let’s take a closer look at what is really happening. Council documents portray a different picture.

Sefton Council have large amounts of money available for projects such as this. This money has been accumulated from contributions levied on private housing developments (Section 106) and in addition there are area ward budgets that remain unspent.

In its Infrastructure Funding Statement 2019/20 the Council confirmed they held £3 .668 million which has not been assigned to specific projects.

In 2019/20 the Council allocated, but did not spend, £403,170 which was earmarked to be spent on trees, open spaces and associated environmental works.

In other words this council has been charging private developers a levy to be spent on improving and maintaining the borough’s environment but has shown that it is incapable of spending £3.668million which sits in the council’s coffers.

Why is it that our local Labour Councillors are not demanding that this money be spent on essential projects that benefit the families of their wards? Is that they do not care, or do not know what is happening in the wards that they represent?

The message to Sefton Council is clear. Spend our money on our historic parks now. Reinstate and improve their vital facilities. Many of these parks were donated to the community by local philanthropists. Sefton’s Labour Council presides over their demise.

We are sick of the excuses, the procrastination, inaction and abysmal leadership of those elected to represent and serve the electorate. Get the job done. Allocate the money now. Money from ward budgets, Section 106 monies (provided to the council when new houses are built in the community) could also be used. There is no excuse. This inaction is a calculated policy by the Labour Council.

Their ineptitude does not bode well for the community, especially when the Government want Local Councils to have an increasingly important role in allocating Government funds to the electorate.