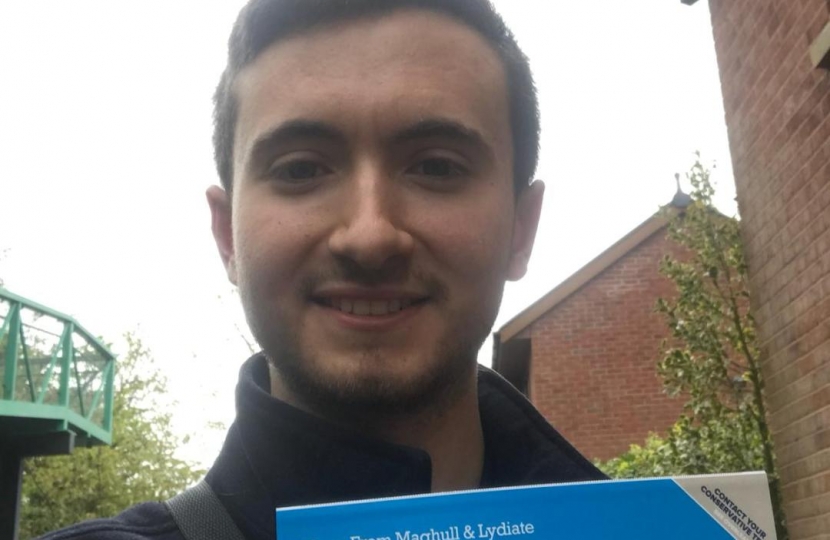 I would like to introduce myself, I am Thomas Hughes, founder of Sefton Central Young Conservatives and Town Councillor for Maghull (East). I would like to thank you for your continued support of the Conservative Party. Over recent months our Association has grown in members with increased support from younger members and we want to reach out to members to inform you of the recent changes that myself and the Chairman are proposing.

Sefton Central Conservative Association are pleased to announce the formation of Sefton Central Young Conservatives. Our branch, ever growing in numbers, is committed to listening to the issues and concerns that young people have. I have seen first-hand the monopoly Labour has over the views of young people and it is our duty as members and supporters of the Conservative party to challenge their dominance.

After announcing the creation of our new Young Conservative Branch, I have been delighted at the amount of positive feedback and support from young people who have shown interest in joining. I was particularly pleased to see other Associations across Merseyside were seeing the same success when myself and representatives from our Association attended a function organised by the University of Liverpool Conservative society in Liverpool.

This is where I urge you to get in touch as we cannot be complacent, the only way we can win further elections is not just for the younger members to assist in campaigning but for all to play our part. If you can spare an hour to canvass or leaflet to spread a positive Conservative message across our constituency, any help no matter how large or small would be greatly appreciated.

To win further elections and show that the Conservative are the real opposition to Sefton Labour we also need to grow our Young Conservative Branch further. If you know somebody under 25 who has expressed interested in joining the party, has supported us in the past or even just voted Conservative please urge them to get involved, whether it is joining the party, leafleting or even standing as a candidate, we need as much assistance in the upcoming elections as possible.

I hope Sefton Central Conservatives can count on your continued support as a members and supporters for the foreseeable future. Please follow @SefCenYC on twitter for the latest updates regarding campaign dates and news from across Sefton Central. If you have any other queries feel free to contact Cllr Thomas Hughes - Thomas.h15@icloud.com – 07845711405. I look forward to hearing back from you.