Sefton Labour Council ARE destroying our local heritage and history 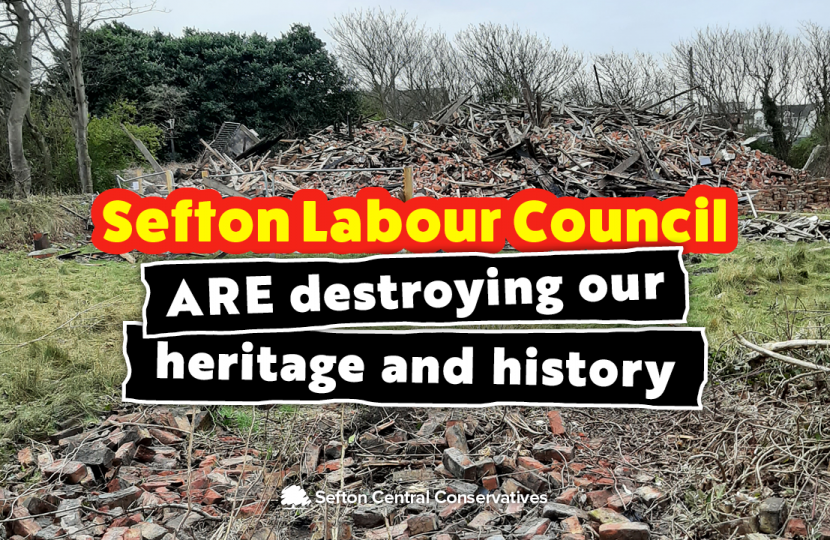 Sefton’s malfunctioning and contemptuous Labour Council has no sense of history. Indeed, it scares them. To examine heritage would be to remind them of a time when local government was efficiently run by the Conservatives.

All they do is pay lip service to the past, with legions of pen-pushing highly-paid, inefficient conservation and heritage officers, with little to show for their supposed endeavours.

Of Sefton’s designated 25 conservation areas, only two have any sort of recognisable management plans, even though more than half have had appraisals of work which desperately needs to be carried out.

Most have been left in a wilderness of neglect and confusion, despite there being yet another layer of bureaucracy devoted to buildings at risk, an increasing number of which are historic churches. These include St Katherine’s Chapel in Lydiate and the chapel at Ince Blundell Old Hall.

Elsewhere the catalogue of abandonment includes Crosby’s Carnegie Library, the boating lake at Coronation Park and the St Nicholas Fountain on the waterfront. Grade One agricultural land at Maghull has been destroyed, as have eighteenth century cottages at Thornton and an historic merchant villa, Glenthorne, in Blundellsands.

And it was only action by Conservative councillor Joe Riley, which further prevented over-development of a site in the adjoining Blundellsands Conservation Area at the last planning committee meeting.

Councillor Riley moved for the refusal of permission to over-extend a property there, having successfully argued that it constituted a new-build which was unacceptable under Sefton’s Local Plan.

Apart from concern over specific buildings, there is also widespread neglect over the maintenance of parks.

Sefton no longer bothers to apply for Green Flag status for our once immaculate public gardens which have become wildernesses of uncut grass, neglected shrubs and unkempt borders.

All testimony to the dereliction of care by a council set on pursuing loss-making pet projects, most notably centred on trying to make Bootle New Strand some wholly unimaginable Venice of the North.