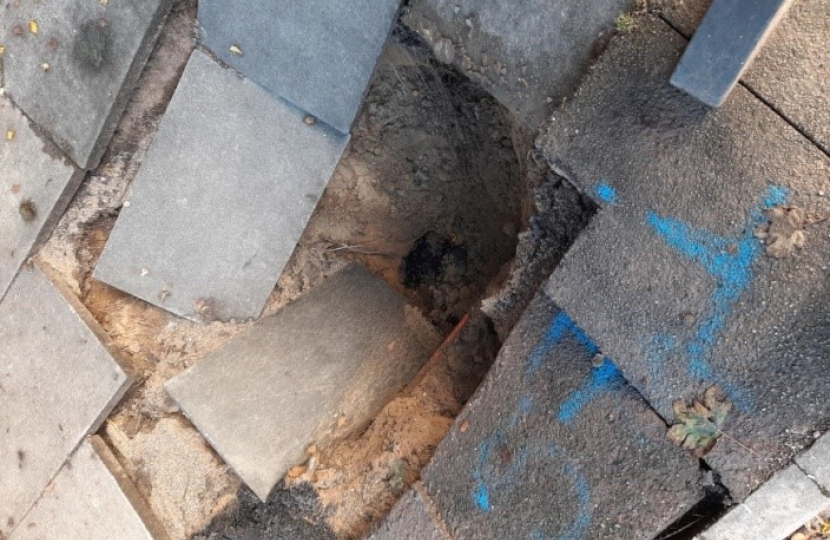 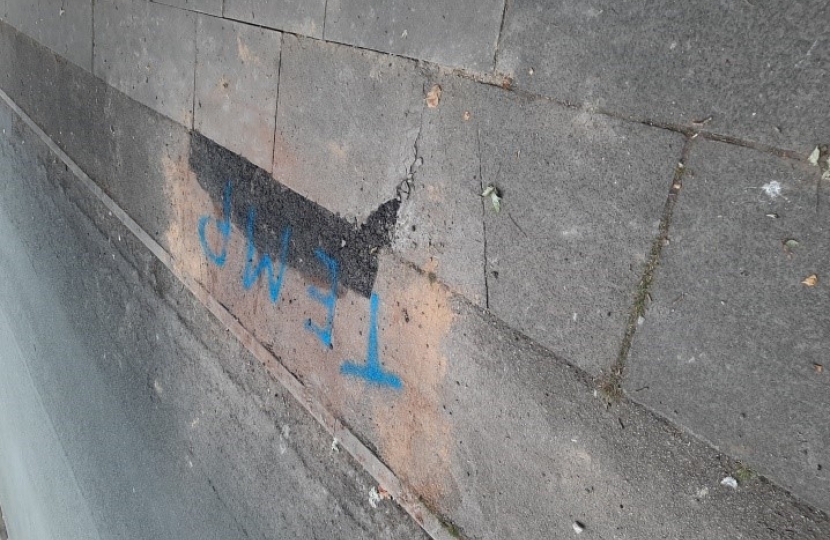 We are all familiar with the joke “How many men does it take to change a light bulb?” However, obtaining value for money should be a key principle of public authority expenditure. This involves not only the procurement of resources but the effective deployment of staff by highly paid management.

Our ability as council tax payers to judge the effectiveness of the Labour Council on this issue can be easily is observed by the way our essential services are run.

The pandemic has undoubtedly caused disruption but it has to be said that the vast majority of council workers who are deployed to provide these essential services have done a magnificent job, working in difficult situations to ensure essential services are maintained.

What procedures however are used to mend a hole in a pavement? Who is in charge of deploying the workman to the site, providing resources and checking on the outcome. To put it simply, who is in charge of mending holes in pavements?

A hole and broken paving slabs are observed on the pavement on Blundellsands Road West in mid-August 2021. The area is marked with blue paint. This form of identification is for what purpose? Not much use if you are frail, and have sight issues. You can still trip and fall. No barrier or cone had been erected. No indication of when it is to be repaired.

One has to ask why the person who had the blue paint was not supplied with a cone and barriers to identify the hazard more appropriately. Was a photograph taken to assist in the identification of materials needed for repair? Is there any joined up thinking?

Luckily a conscientious neighbour did find a small cone to identify the hazard for pedestrians, particularly those who are partially sighted.

I duly contacted the council by telephone to raise my concern. Thankfully the next day, a barrier, cone and sandbag was placed around the hole. We waited in anticipation of the repair being made, especially as school children were returning to school that week.

Later that week the barriers were removed and placed against the wall. Job done, I thought. However, I was horrified to observe the paving stones had been realigned in some hazardous way one cracked paving flag had not been replaced and some attempt at applying mortar to the edge of the tarmac verge had been made. The area was still a trip hazard.

This surely could not be the work of which anyone could be justifiably proud.

But then another visit to the site must have been made, as now, a lump of tarmac has appeared across some of the paving and big, bold letters inform residents that this is a temporary repair!

One wonders how long temporary means in Sefton.

Sadly, by 10th September 2021 the temporary tarmac and paving caved in again causing a serious cavity to appear in the pavement. Our worst fears have now been realised as described in the article which appeared in the Liverpool Echo:

There have now been at least 5 visits to this hole in the pavement, which must have involved 10 workmen yet still, the hole remains and has grown. This is a gross waste of money, time and effort.

Local residents spend an inordinate amount of time telephoning the local authority to highlight the issue (some, give up in disgust ) . If you decide to email you have no idea if anyone else has reported it and are informed that it will be 21 days before a response is made. !

It has now taken 5 visits to this site to patch a hazardous hole on the pavement. Resources are not being properly managed, value for money is not apparent. Why is it so difficult for the person who was initially sent to visit the site, to mark it with paint, place bollards around it, photograph the paving and then itemise what was needed for an effective repair? Placing a sign on the hole stating the date and time of inspection and date for repair would also be useful.

But instead the work has to date involved:

We have three ward councillors for this area. They need to spend some time walking around their wards, observing the issues that impact on the daily lives of residents. I am afraid that those who manage our council are, it seems, lacking the leadership skills to sort some of the most basic problems. Dealing with the issues appertaining to the efficient deployment of regional funding could be too difficult for them to comprehend. We fear for our future.

What we want from a local councillor.

Take a walk around your ward and make observations and take action on the following:

Areas that are covered by excessive dog excrement

Paving which is unstable and a trip hazard

Roads which need sweeping and weeding

Road signs which need cleaning to improve their visibility

Road markings which need re instating

Areas where inconsiderate parking obstructs the highway and pavements

Then, when all these housekeeping issues are dealt with, deploy some thought and resources to developing large, out dated shopping complexes.

Curiously, today 14th September, a van from United Utilities appeared and one of their staff began re-aligning the barrier railings. There is still no indication of why the hole appeared, when it will be repaired and what pressure can be applied to United Utilities by the Council if it is found to be the responsibility of the water company. A month has now passed since the problem was first reported but still no solution is evident.