WHERE HAVE ALL THE GREEN FIELDS GONE? 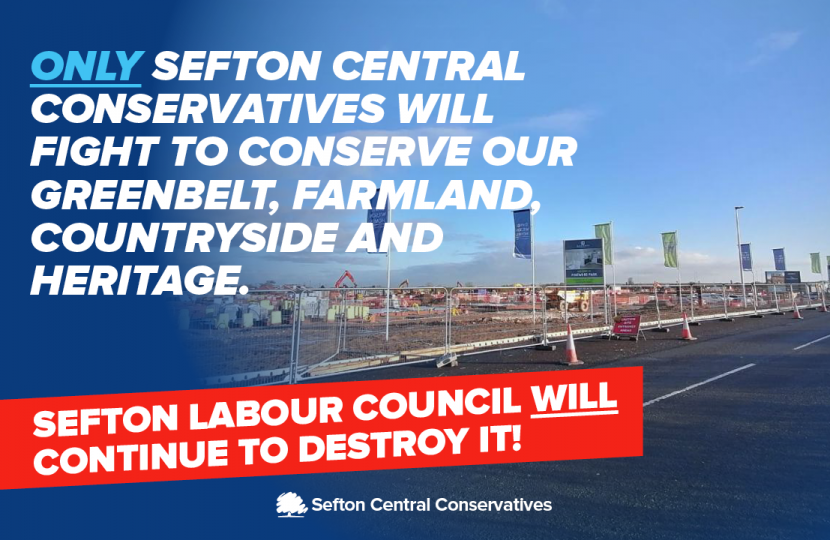 Take a last look at a field near you, it could soon be just a distant memory.

Unless it is stopped, an even greater proportion of our precious agricultural land will disappear under tarmac, bricks and mortar. Once lost, it can never be reclaimed.

That rich brown soil helps grow the crops that feed us. That lush green grass helps sustain our dairy industry. This agricultural land is the beginning of our food chain; we cannot afford to lose it. Agriculture is essential to our economy. Farms do not stand alone, each complements the other. When one is lost, it has an impact on the others, the web of stability is broken and the negative consequences ripple through our communities. We need our farmland to produce food, store carbon, restore and protect nature.

Let us take a look at what have our Labour Councillors have done in Sefton. Gradually week by week, month by month they have allowed our precious agricultural land to be swallowed up by housing estates.

Hundreds upon hundreds of houses are now being erected on green belt land. Some of these homes have also been built upon flood plains and the risk of flooding is ever present. Surface water is increasing, largely as a result of increased housing and sealed surfaces. During increased rainfall the volume of water impacts upon the outdated sewers and the flood water becomes contaminated with sewerage. Householders find increasing difficulty in obtaining home insurance as premiums rise in price.

Take a drive around your neighbourhood, to Thornton, Formby, Southport and Maghull and observe the destruction of the landscape. What have Labour done to our valuable landscape? They have built all over it and they will continue to do so. Historic farmsteads have been flattened, hedgerows destroyed and with it the array of nesting sites for our birdlife and small mammals.

Continuing with this ‘build and be damned’ approach just serves to quickly meet housing targets without giving concerted effort and thought to the impact of these developments on the local population. It undermines climate action, stalling nature’s recovery and gobbling up our most precious green space that’s vital for our health and wellbeing, while doing next to nothing to tackle the affordable housing crisis.

The Wildlife Trust has pointed out that more and more people live their lives with little or no contact with nature. This disconnect affects mental health, contributes to obesity and even has an impact on life expectancy. Space for wildlife has been drastically reduced and many of our traditional wildlife species have declined due to uprooting natural habitats.

The Wildlife Trust points out that new housing should be located in areas that are already well served by infrastructure and should avoid harm to the existing environmental assets of an area. This requires an up-to-date ecological network map, identifying natural features and habitats.

The Labour Council took far too long to compile their register of brownfield sites and, as a result, had no accurate idea of their land ownership. As a consequence, they decided to encourage building on agricultural land as a quick fix to meeting targets for housing provision.

They refused to listen to the general public who have suggested building homes and community assets in some of our towns. Recently, private developers have proposed rebuilding on the vacant sites in Crosby Village as apartments and some retail units but our Labour Council rejected the developer’s application for Central Buildings, which is now the subject of an appeal to the Planning Inspectorate.

Southport, a historic and famous coastal resort has become a ghost town. There are some magnificent buildings within this area which need to be redeveloped for affordable housing for both young families and for single householders, both young and old. This would do much to regenerate and repurpose the area, bringing some vitality and pride back to this desolate town. The Council must show creativity and vision to propose plans and attract inspirational developers to regenerate parts of this much loved town.

It is estimated that we could build 3 million homes into existing towns and cities in an effort to reduce the pressure on our precious agricultural land. New build using more and more land is not the only answer.

Redeveloping commercial and retail units will require leadership, ingenuity and a willingness to work with the creative private sector but it can be accomplished.

Local councillors have a duty to manage the land in their borough that combines agricultural productivity with sound environmental stewardship. Little of that is evident in Sefton.